You often hear about writers suffering from “Writer’s Block,” those periods of time where you really, really, really want to write something brilliant but the ideas for new content just don’t seem to flow.

Then there are those pesky moments when a simple “yes” or “no” response by a character could send the storyline into an entirely new direction and you, as the writer, have to think out the reprocussions stemming from those single words before committting to it.    Does he get mad?  Would she be sad?   Ugh, human emotions.

For me, my greatest reasons, excuses, distractions, for not getting my second novel written fast enough can be neatly summed up in this one picture.

A 7 year old, a parrot that loves to canoodle, trying to write in the living room (so I’m not an absent mother), television, and um…. Facebook. 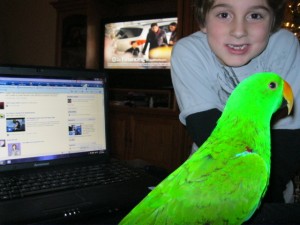