What started out as a fun night with my husband, son, and friends turned into the most amazing night of revelations and an incredible story of tenacity and survival.

Let me start at the beginning. I was having dinner with hubby, our 8-year-old birthday boy, and our friends Missy, Craig, and their two children at a local restaurant/family fun center. No matter where I am or whatever I’m doing, the Writer’s Brain never shuts off.

I’ve been toggling with spin off story lines from Love Unscripted involving bodyguard Kyle Trent’s brothers. I’ve given Kyle three brothers: Adam, Michael, and Jason, and I have their stories pretty much outlined and first chapter bare bones typed. Every writer has different methods of character development and for these three brothers I have a good idea of what makes them tick.

Jason’s story was the last one I had developed. He’s in his 30’s, is living outside of DC, and he’s just returned from Hell. He was a medic aboard an Army helicopter, was captured, endures things that no man wants to even imagine, and when he’s back on US soil he is missing the lower half of his left leg. So what does all of this have to do with dinner last night? I’m getting to that.

I started writing Jason’s opening scenes – those first few sentences that let’s us get to know him. What’s his situation? What are his struggles? What is it that he is going to have to overcome and grow from as the story progresses? Is he on tons of medication? Does he have nightmares? Flashbacks? Happy? Sad? Pissed off at the world? And what the hell is the name of the Palomino mare he’s struggling to hold on to while cursing that she’s pulling him off balance?

These details are all of those things that let’s us become intimately acquainted with the character. Tidbits of a man and his struggles that I have never personally experienced. So – so much for writing about what I know.

I do a lot of research. I have to or else readers like you will become disconnected from the material and angry because the fiction isn’t factual. How the hell can I write about a man who has lost a limb? The closest I’ve ever been to relating to that was when I broke my right ankle and had to figure out creative ways to shower with a cast on. And let me tell ya, there is only so much you can glean from Google.

So I’m in mid sentence at the dinner table, trying to be sociable without talking while chewing on pizza, and I notice a young man sitting with his girlfriend and another couple a few tables away. His cowboy hat first caught my eye and then, to get comfortable, I notice him disconnect his prosthetic leg. The urge to spring out of my chair and talk to him was overwhelming. I literally clawed the table to stay put. I wanted to talk to him in the worst way but then the waitress brought him this monster sized hamburger and there was no way I was going to be rude and interrupt the man’s dinner. Rule #2 (I think) is NEVER COME BETWEEN A MAN AND HIS FOOD.

I left the man and his burger in peace. Research would have to wait. I could deal with feeling bummed about a missed opportunity – that’s why I ordered a double Gin and Tonic.

And then – as fate would have it – I see him in the game center with his friends. Like a freaking psycho stalker crazy author chick I watched, observed, and finally – after a small freak out in front of hubby and Missy about wanting to talk to the guy – I got the nerve to approach him.

“Hi, my name is Tina. I write romance novels. I’m a partial lunatic with twenty imaginary friends who really needs to ask you questions about life.”

His name is Kyle, and by some stroke of luck or grace, he’s willing to talk to me. I ask him a barrage of questions, storing each answer in my brain file labeled “Jason Trent.” I started out gentle and benign and then got personal. Those things that we take for granted every day: showering, sleeping, dealing with pain, struggling with the emotional aftermath, making love to his girl. (oh, you know I had to go there – I write Romance novels, people! And as an added bonus, I met his lovely girlfriend who happens to be a new Kindle owner and is just as obsessed about Christian and his Fifty Shades as the rest of us. OMG! It was instant love!  And if that wasn’t mind-blowing enough, Kyle rides horses as well – same as Mr. Jason Trent.)

Kyle tells me his story. How he was driving down the highway minding his own business when his life changed forever. Another car started it and I sort of blacked out mentally when he described when the tractor trailer got involved and drug his car 500, 5,000 – too damn many feet far for my rational brain to handle.

And then, to top it all off, once the dust started to settle, Kyle’s car caught fire. A passerby happened to be a medic and tried to get Kyle out, but his leg was pinned. Let’s just say field surgery was performed on the final few inches of attached flesh and Kyle’s leg from slightly below the knee down stayed twisted in the wreckage.

Kyle was flown by Medevac to the hospital.

Apparently it was not his time to go. My jaw dropped when he showed me pictures of his car or technically, what was left of it. And then he tells me he was back to work in only four months! Holy shit! Just from talking to him I could tell he’s the kind of guy who says “watch me” and or “F-You” when someone tells him he can’t do something.

I learned a lot. My heart and mind are now forever altered from meeting and knowing him.

Just know that when Jason’s fictitious story is written, a tenacious survivor named Kyle from Pennsylvania is woven all around him.

Here are pictures of what’s left of Kyle’s car. 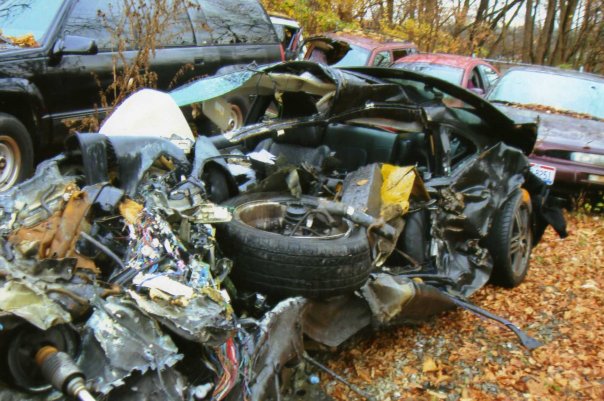 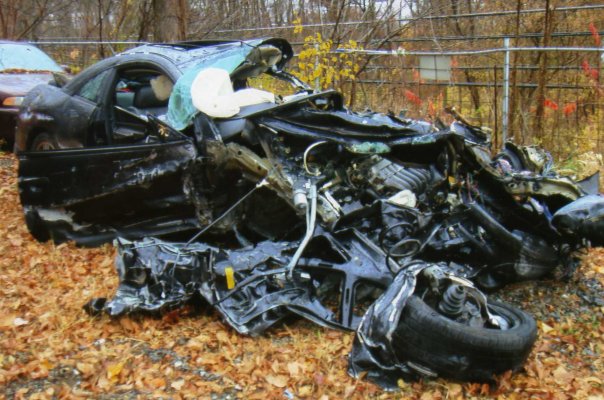